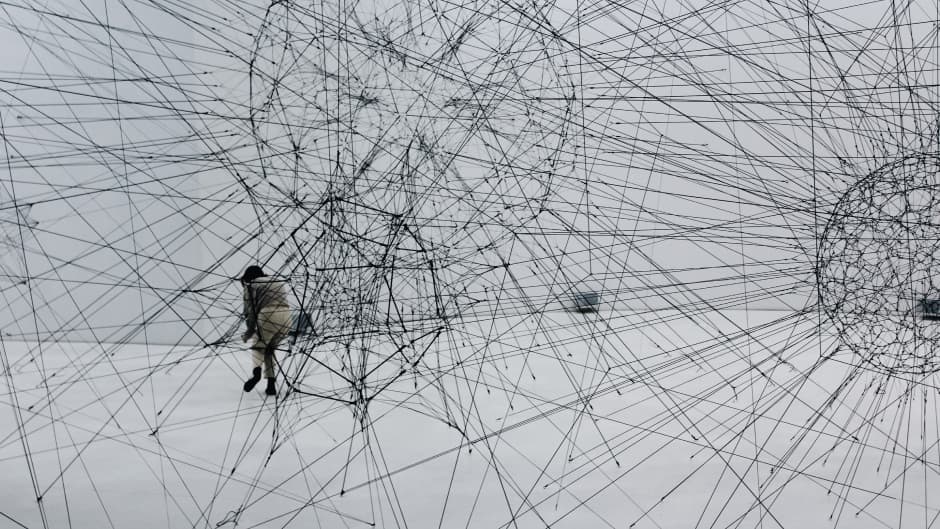 I remember a print on one of the walls of the agencies I used to work for. It looked like this:

Design problems start on the far left edge of chaos. If you stop solving the problem too early, the solution stays on the chaotic side. But if you push through the complexity of the problem, you might just have a beautiful, simple solution.

Over time, I've come to learn that there are various ways by which you can arrive on the far side of complexity; linear and networked thinking being 2 of them.

The most common way to solve a design problem is through traditional, linear thinking where we rely solely on using old, organised knowledge and patterns of thinking.

Here’s a simple example of linear thinking to illustrate this in practice:

Alas, simplicity on the far side of complexity!

Except, an idea that goes through linear thinking is siloed and disconnected from other ideas, making it, at best, a narrow-minded solution.

This leads us to the second way of solving problems — networked thinking.

The second way to solve problems is through networked thinking which is best described by Anne-Laure Le Cunff in her article on this concept:

[Networked thinking is] an explorative approach to problem-solving, whose aim is to consider the complex interactions between nodes and connections in a given problem space. Instead of considering a particular problem in isolation to discover a pre-existing solution, networked thinking encourages non-linear, second-order reflection in order to let a new idea emerge.

With this type of thinking, problem-solving looks a lot like a neural network where an idea can be presented by a node and neighbouring ideas connected with branches. The result is an infinite landscape of interconnected ideas influencing and enriching each other.

Similar to linear thinking, you start with an idea but instead of trying to solve the problem with a pre-existing solution, you open up your mind to explore unrelated topics, thereby letting new ideas emerge and increasing your chances of serendipitous discoveries.

You don’t know it yet, but this discovery will be the catalyst for Google to acquire you, ushering in a new way for billions of people to navigate digital spaces.

Both approaches have a place in the design process. Sometimes the goal isn't to discover something radically new but to simply find a tried and tested solution. This approach is perfectly fine.

But sometimes certain problems begs for simplicity on the far far side of complexity — simplicity that can only come through the serendipitous discoveries of networked thinking.

We are discovering in nature that simplicity often lies on the other side of complexity — so for any problem, the more you can zoom out and embrace complexity, the better chance you have of zooming in on the simple details that matter most.

Millenia of evolution has taught us how falling back on pre-existing solutions are often the safest and best way to survive.

But now, a new designer is making their way around the [[block]]. These designers have learned how to let their brain wander and explore the very far corners of chaos, connecting ideas and turning them into solutions that might otherwise have been dormant and unexplored until the next Millenia.