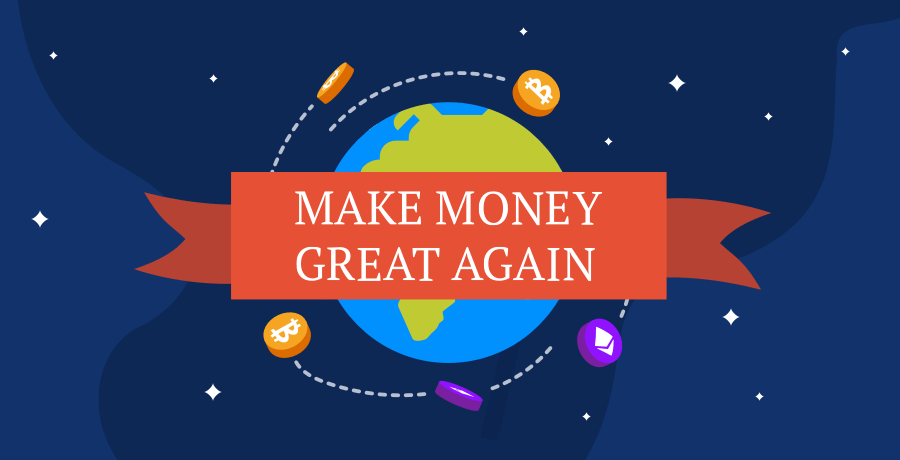 You wake up in a world where there is no cash. There are no coins or notes, no bank branches or bank accounts, and therefore no apps to tell you how much money you have left to spend or invest.

It’s Sunday evening and you’re hungry. You realise you can’t whizz through the drive-through, swipe your card and get a Big Mac meal in exchange — there are no bank cards.

But you’re a smart human and managed to teleport some moolah from your world. You walk into the store and give the owner your money in exchange for a burger and chips. Except, instead of receiving a nice meal, you get a puzzled stare.

It turns out she has no clue what money is — this world only works through the exchange of physical goods. If you want the Big Mac, you’ll have to give her a pair of pink headphones.

At this point, you say, “What! This story is absurd — what world doesn’t have money?! And who will give a pair of headphones in exchange for a Big Mac meal?”

It depends on how hungry you are, right…?

Luckily I snap my fingers, you wake up, and you realise this was just an awful dream. You give a big sigh of relief, “Phew, luckily I can have my Bic Mac and supersize it. Woot!”

A few hundred years ago, this scenario wouldn’t have been so absurd. If you whipped out a card or a couple of notes to buy something, you would be considered stark raving mad. You may even have been hanged for witchcraft.

Trading one product for another was the norm at some point in time. For example, if we lived a couple of 100 years ago and you needed some building material, I could have given you some timber and ropes in exchange for a cow. This way, you would’ve had material to build a shelter, and I would’ve had food for my family.

Cutting up a cow in exchange for less raw material clearly illustrates the limitations of this form of value exchange.

Fast forward to today and the primary means of exchange has a slightly different shape. It looks more like this: Notes, coins, debit and credit cards, banks, digital money, apps, insurance, hedge funds, derivatives and futures trading, stock exchanges, interest, tax, retirement annuities, pay-day loans, bonds, and the list goes on and on.

Money has spread to almost every corner of the world with 1000’s of products built around it, impacting every aspect of our lives.

It’s hard to imagine that there used to be a time where the primary means of exchange was as simple as handing someone a cow in exchange for timber and ropes.

Money has come a long way and made our lives easier and better in ways we cannot even calculate. But money has also become complicated, exclusive, and broken in many ways. It has evolved to become centralised, mostly controlled by governments through central banks with policies and regulations governing it.

In the cryptocurrency world, there’s a big buzz around solving the inefficiencies of money through decentralisation, and we often worship or ridicule cryptos on this single feature. However, even though decentralisation is the foundation of a better financial system, the biggest mistake we can make is thinking that’s all that is required.

But it’s not, and that’s what this post is about: It’s a reminder and exploration of what else is required to make money GREAT.

Due to the centralised nature of money, it has also become very siloed, with products that are largely incapable of efficiently talking to each other.

Fintech players have been putting a lot of effort into solving this problem. These efforts are, however, only changing the marketing or user experience around accessing traditional money; they’re not changing money itself and the impact, therefore, is quite marginal.

Distributed ledger technologies, on the other hand, are making products fully programmable, interoperable, and streamlined, creating a completely new paradigm shift in how we think about and work with money.

To make this more tangible, here are three examples of a decentralised application that allows you to set up your own If This Then That rules:

Connected products move money from being decentralised to empowering people to be in control and manage their own money.

The last example above is not just an interesting idea. It also points out a fundamental flaw of today’s money: it can’t stream like music to your ears does.

Centralised money and systems have enabled middlemen to take value away from people, making it slow and expensive to move around.

For money to be great, it will not only have to become decentralised, but business models driven by fees will have to be changed as well.

Debt has been the oil of the economic machine, the primary driver for the world to function as it does today. It has enabled businesses to start and become highly successful, created job opportunities, and redistributed wealth that otherwise might not have been possible.

Now, I don’t think a new decentralised financial system would eliminate debt or take away the pain that is often associated with it, but money can become a lot more responsible if we understood the relationship between debt and identity.

One of the reasons you can borrow money from a bank or a friend is that there is a certain amount of trust between you and the lender. That trust gives the lender enough confidence that you will be able to pay back the loan.

Trust is a very complex concept, but for simplicity purposes, we could boil it down to the sum of the outcomes of all commitments in past relationships, or, put differently, trust is a track record of promises.

To make this work on a national or global level where there is little or no trust between individuals or entities at all, we needed a system that could keep track of these promises.

The digital identity system came in quite handy here. By combining a centralised identity system with an individual’s track record of money, anyone was now able to see how trustworthy or likely someone is to pay back a loan without having any prior relationship with the person.

The problem with a centralised identity system is that it’s not very scalable, highly inefficient and is quite vulnerable to identity theft. If you’ve ever had to fill in forms at different places with the same information multiple times, you would know what I’m talking about.

If we get it right, a decentralised identity system will allow us to never fill in a form again. Even though this would save the world millions of hours, the bigger problem here is not making forms more efficient, but how to make an identity system inclusive.

Right now, 1 billion people don’t even have any form of identity record, let alone a decentralised one. For this new system to be truly epic, we’ll have to figure out how to do this on a global scale, making it inclusive to everyone, both the 1 billion without an identity and the 6 billion with a centralised one.

There’s an old proverb that says it takes a village to raise a child. It’s simple but also profound in so many ways — it refers to how people learn most effectively, the effect groups of people have on an individual and the ability for the brain to change.

We’re on the cusp of a significant revolution, and our world will never be the same again. Just the mere thought of having money that can stream like music or data breaks my brain. It requires an entirely new paradigm shift to truly grasp how it will impact legacy systems, policies, governments, business models and our relationships with money and machines.

But creating the technology to make this possible, is the easy part. The hardest part is building a new financial system that works on a global level that includes everyone, and this requires a new level of thinking.

Albert Einstein coined it well by saying that the significant problems we face cannot be solved at the same level of thinking we were at when we created them.

I’ll end off with a quote from Richard Wagner’s article What is wrong with money:

“Money doesn’t have value if we keep it in stacks. It has value only in our relationships with others.”

Money is a complicated thing, but I have a slight suspicion that somewhere in these few simple words, we might find a clue to making money great again.